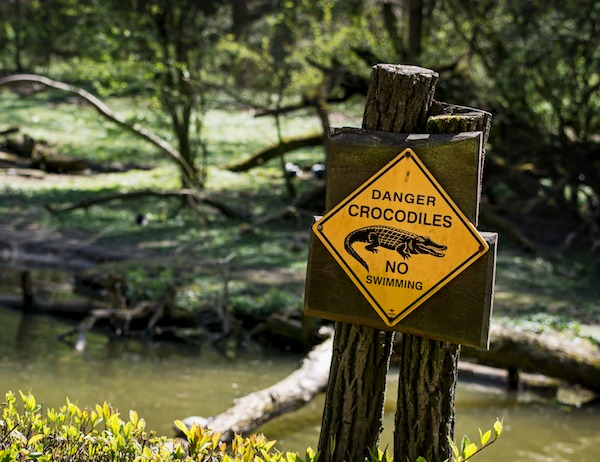 Crocodiles in the top end

You are here: Home > Destinations > Northern Territory > Crocodiles in the top end

Saltwater crocodiles are arguably the most famous animal found in the Top End – whether they’re in wildlife parks or around the Northern Territory in the wild. With that said, how do you safely get up close and personal with them?

Visit Darwin’s Crocodylus Park where you can feed a jumping crocodile or hold a baby one in your arms. The park hosts over 10,000 crocodiles that vary in size and age, with some weighing up to 500 kilograms. The park also has a museum where you can look at artefacts, cultural items and information displays that delve into a crocodile’s biology – you’ll soon learn why you shouldn’t get too close to them in an uncontrolled environment!

The Crocosaurus Cove is where you will see saltwater crocodiles up close, but behind aquarium walls. There is also the option to see them from viewing platforms, or dive with them in the water in the ‘Cage of Death’ – a clear-walled cage (don’t worry, it’s completely safe).

The Darwin Crocodile Farm also has afternoon feeding time for a lot of the crocodiles. You can meet Burt, the (crocodile) star of Crocodile Dundee!

A lot of the Northern Territory’s rivers average about five crocodiles per kilometre of water, but in some places that increases to over 15. While it’s great to want to see them as closely as possible, please be aware of signs and if you are in crocodile territory, you need to be responsible for your own safety more than anything. There’s almost as many crocodiles as there are people in the Northern Territory, you’re more than likely going to come across one – observe the warnings, act accordingly when you’re in their habitat and assume that they’re present even if you can’t see them.