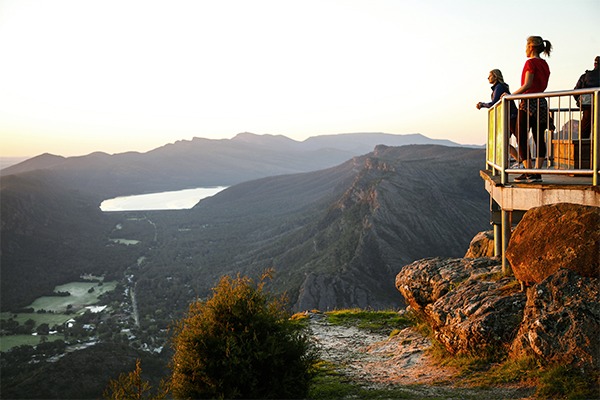 You are here: Home > Destinations > Victoria > Explore the Grampians Way

The Grampians is one of the most picturesque places you can visit within Victoria, with breathtaking views to accompany the myriad things to see and do in this neck of the woods.

Start your journey at Halls Gap – a small town with a big personality that’ll no doubt pack a punch. Immerse yourself in the fascinating dreamtime stories of the local Indigenous people in Brambuk, and then embark on a stroll out to the mesmerising Mackenzie Falls.

From Pomonal, it’s 48 kilometres to Willaura, a place for the history buffs. During World War II, it was the home of soldier settlement farms and then some years later, the town cemented itself as one of the best places in western Victoria for crop development.

Next on the list is Glenthompson, a town with a population of just a couple of hundred! Local brickworks throughout Glenthompson have made the town a spectacle.

The picturesque Dunkeld is next along the Grampians Way, and is the gateway to the southern Grampians. The striking views of Mount Sturgeon and Mount Abrupt will captivate you, so make sure you get the camera ready!

Another major stop along the Grampians Way, Cavendish is a haven for settler’s secrets, especially if you put your ear close to the Wannon River.

Brimpaen might be small but there’s still plenty to explore! Start off by visiting the Grampians Mountain Adventure Company where rock climbing and abseiling professionals will give help deliver a unique view of the Grampians National Park and Mount Arapiles.

Located on the Western Highway, Dadswells Bridge has the Grampians mountain range as the picturesque backdrop. Not only can you enjoy the incredible views, the Mount William Creek Nature Trail plays host to a wide range of wildlife.

Unfortunately, this is the home stretch to cap off an unbelievable journey. Despite it being the end, there is still a lot to see in Halls Gap, so if you didn’t have time at the start to explore everything, now is the perfect chance to do so or revisit things you didn’t get time for, or missed, at the start.