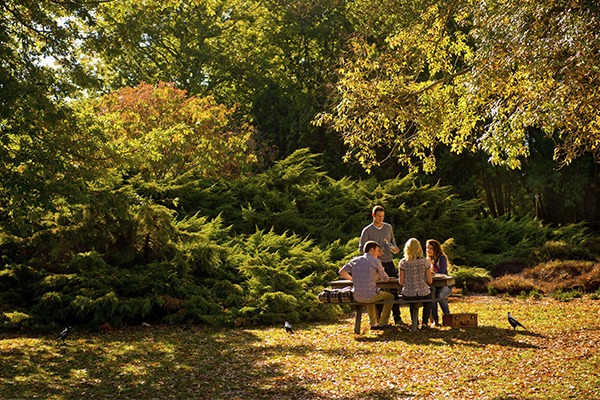 Jaunt along the Epicurean Way

You are here: Home > Destinations > South Australia > Jaunt along the Epicurean Way

No trip to South Australia is complete without a trip along the Epicurean Way. This incredible road trip brings together four of the state’s most popular regions: Adelaide Hills, Clare Valley, McLaren Vale and the Barossa Valley.

Leaving the sights and sounds of Adelaide behind, you’ll reach McLaren Vale in less than an hour by car. South Australia has a reputation for being a haven for arts, culture and scrumptious local produce, and McLaren Vale doesn’t disappoint. Many people consider McLaren Vale to be the home of wine production in the state, as the area has some of the oldest wineries and vineyards in the country. So, it’s time to get wine tasting!

One hour north of Adelaide is the iconic Barossa Valley. The Barossa Valley is known for its delicious food and wine, but it’s also a region rich in history, and there’s no better place to learn all about it than the town of Kapunda. This quaint spot is the oldest mining town in Australia, and as you wander the streets of Kapunda, you’ll feel like you’ve been transported back in time – the main streets are lined with breathtaking colonial buildings that have been meticulously preserved until this very day.

The next stop on your tour of the Epicurean Way is the Adelaide Hills, located less than one hour’s drive from Adelaide. If you’re looking for a picturesque experience in the Adelaide Hills, then look no future than the impressive Mount Lofty Botanic Garden, which comes alive in springtime. Throughout this huge, 97-hectare garden, you’ll find all sorts of beautiful plants from regions around the world, including New Zealand, South America and South-East Asia. Wander through the different gardens at your leisure, or follow one of the many guided trails that have been set up throughout the garden.

Looking for an a-maze-ing activity for your trip to the Clare Valley? Then the Mintaro Maze, in the heart of the tiny town of Mintaro, should pique your interest. The Mintaro Maze is made up of more than 800 conifer trees and provides a mystical adventure for the whole family.