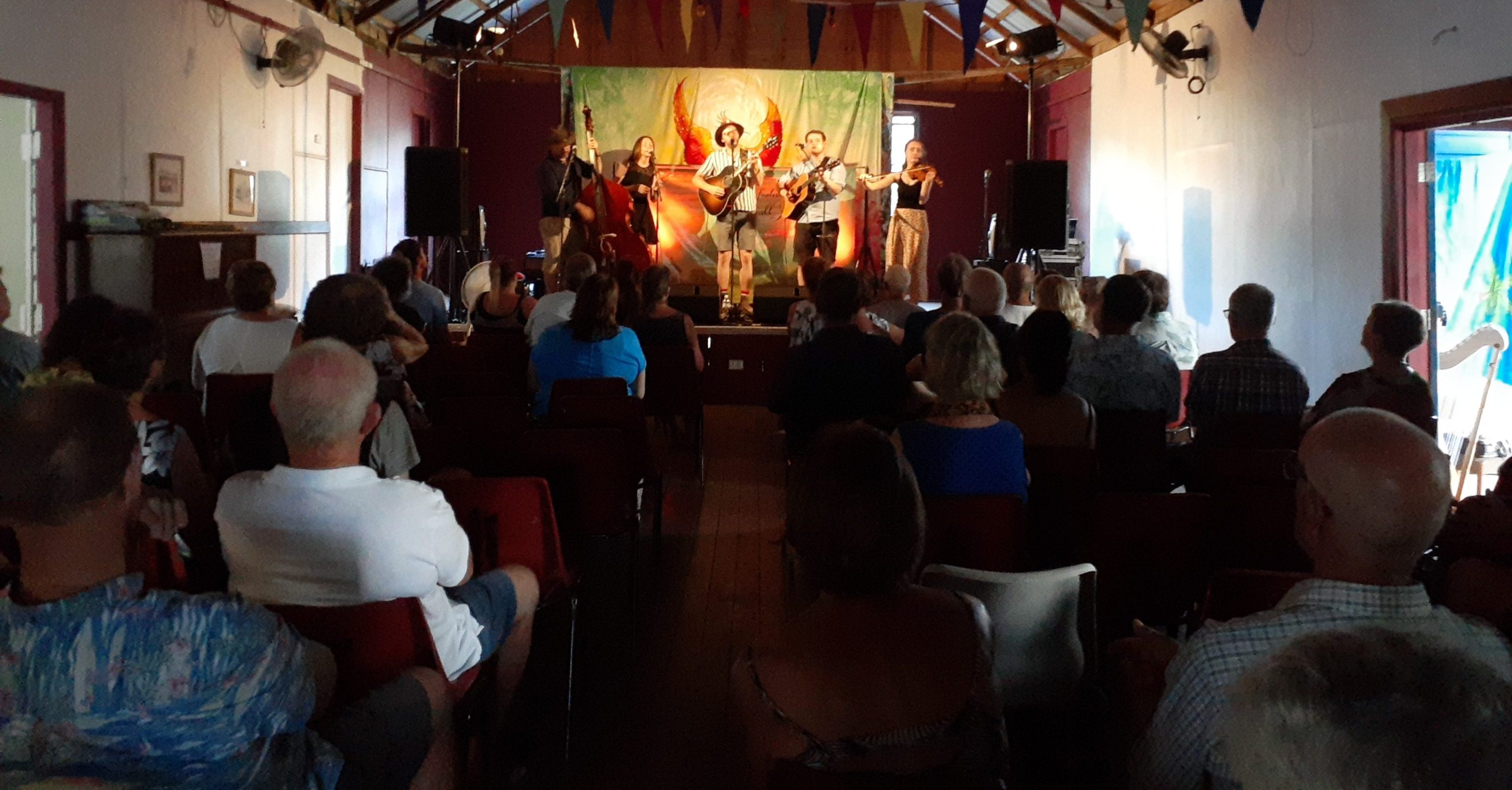 Something very special is happening in Nymboida. About 30 kilometres southwest of Grafton, New South Wales, this little hamlet nestled among the mountains is raising itself from the ashes, literally. Its cafe faces the community-based campground, which still shows some signs of the horrifying blaze that hit on November 8th 2019. But now powered sites are available with more spots by the creek. Typical of the Aussie bush, green leaves are springing up around blackened tree trunks all around.

On February 2nd 2020, Nymboida hosted the last concert in the season of the Festival of Small Halls, organised in conjunction with the Woodford Folk Festival. This was no mean feat considering the dozens of nearby homes destroyed a short three months earlier. The Red Cross arranged the catering, as a fundraiser. Before the concert a local harpmaker and his son entertained the crowd.

Later, inside the hall, with a backdrop of a phoenix spreading its wings above embers, Australian musician Jack Carty and Scottish musician Siobhan Miller and entourage presented gentle messages of hope among adversity. Some were traditional folk tunes, generations old. This year, more than ever, the area needs some support.

Taking a stroll up the rise above the hall, I explored Nymboida’s streets. The fire had taken one house and left the next fairly unscathed, or a shed but not the house. Someone was now living in a caravan by the dam. A twist of fate. Unimaginable. Hills all around were still blackened. Yet, only a couple of kilometres away was open pasture dotted with cattle comfortably grazing.

It was 36 degrees that February day. How generous was the stranger who had set up not one, but two different water slides for the kids (and anyone else)! Everyone, some with wet hankies at the ready, hoped for some relief as the clouds rolled in. Despite the lightning, only moist little kisses from heaven drifted down. For a beach-loving Brisbane resident like me, the conversations were confronting. ‘That storm’s going to miss us again.’ ‘Haven’t mowed for two years.’

With quiet dignity and a strong sense of community, Nymboida is on the mend. Why not cool off in its refreshing river and take the time to explore?

For more information for your visit, contact Nymboida Camping and Canoeing on 02 6649 4155.